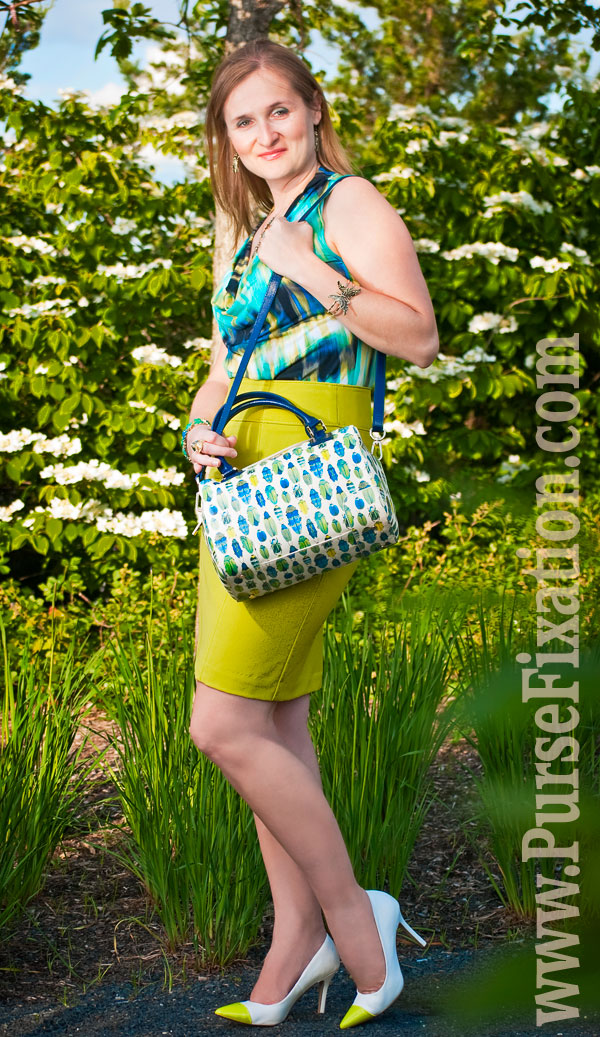 Dragonflies, grasshoppers, scarab beetles, butterflies, bees, cicadas: they all conquer the fashion world spreading their wings on the Red Carpet and beyond! Striking prints, embellished appliqués, exquisitely crafted jewelry, ornamented accessories: insects have them all covered. Allured by the papparazi’s flashes, bugs become stars in Valentino, Vera Wang, Givenchy, Lanvin, to enumerate a few. Metamorphosing from creepy, crawly beasts into mesmerizing, beautiful creatures, insects touch our imagination and convince us to come closer and look at them in amazement.

So let’s take a look!

I heard my heart fluttering when I first saw this Tory Burch Robinson Printed Middy Satchel. The graphic, vivid and detailed beetle print with painting-like qualities and vibrant, fresh colors captivated me utterly. It’s so realistic, dynamic and rich that it keeps stimulating your imagination. Startling how classy and elegant this jaunty beetle motif can be! Water-resistant, coated Italian canvas and timeless shape add an extra “must-have” element to this one of a kind purse! Adore it!

The blouse is like a luminous brush painting made with intense watercolors. Truly resplendent! I love how the blue, green, lime and white melt together and become a delightful setting for the colony of beetles. The fabric feels so soft and a draped neckline flows gracefully with every move creating a lovely cowl.

It’s fascinating how many fashion terms are there for necklines in women’s garments and a cowl is just one of many. The word comes from cuculla which in Latin means “hood of a cloak” and was originally worn by monks in Northern Europe in the Middle Ages. But who was the queen of this bias cut and introduced a cowl to the fashion world? A French designer of course! Madeleine Vionnet revolutionized fashion of the time (1930s) and set trends with her fancy draped dresses that, thanks to the unique technique of bias cut, moved with the wearer. Voilà! Ah, these French!

But our jeweled insects buzz for attention! Look! Two beautiful American Painted Lady butterflies rest on my left hand (similar bracelet, similar bracelet, similar ring, similar ring, similar ring). Love the painstaking carvings, truthful size and elaborate shape. It seems like they don’t mind beetles’ company at all! They must know that scarab brings good luck! It was commonly believed in Ancient Egypt that scarabs are sacred symbols of rebirth because like the sun god Ra (often depicted as a scarab beetle), who rolls across the sky transforming bodies, similarly scarab beetles roll dung into balls as brood chambers where they lay eggs that transform into larva. That’s why the amulets in the shape of scarabs became so popular in Ancient Egypt throughout the pharaonic period and later.

My scarab amulet is a Rachel Roy beetle cocktail ring with shell-colored resin and sparkling glass stones crafted in gold-plated metal. Resin is a popular material frequently used in jewelry, watches and all kinds of accessories. Natural resin is a plant secretion, particularly of coniferous tree, used in the production of adhesives, food glazing agents and also as components of incense or perfume. For instance, amber is a hard fossilized resin. The term “resin” is also widely used for many synthetic substances that harden into transparent solids and some insects’ secretions. Looking at a jewelry piece with “resin” in it, you may still wonder which one it is: natural or synthetic. Most likely the price will be your best visual cue. Synthetics tend to be much cheaper.

Natural or synthetic, the resin on my scarab ring is exquisite and opalescent, showing a magnificent spectrum of bright metallic green and blue colors. Truly remarkable! The scarab looks like a king among the colony of beetles on the bag! The same colors, same shape but dominant brightness and powerful head structure.

The necklace (similar, similar) and earrings (Top Secret) add some more fellow scarabs to the beetle party. The store didn’t actually have earrings but I purchased three necklaces and made earrings (similar, similar, similar) myself out of these two pendants. Need is a mother of invention, as they say! The bracelet from JCPenny is composed of green and blue triangle and lozenge pieces in a gold tone setting. It blends perfectly into the scenery of the beetle kingdom. 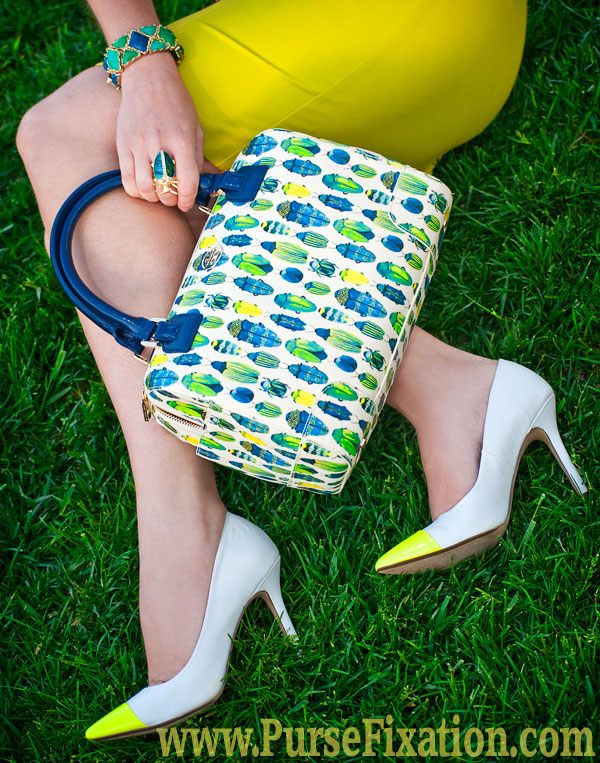 The skirt (Worthington, JCPenny, similar) is of a fresh lime color with almost a neon intensity to it which pairs greatly with the tip of the Mix No.6 heels but also emphasizes the color of some of the scarabs on the purse and hues of the blouse.

Now, tell me how can you not feel sympathy for these little creatures around us? Fashion changes our perception! Something that once was creepy and unpleasant, now becomes a sophisticated fashion statement at which we look with admiration.

And you, have you been bitten by this fashion trend? Do you own any insect inspired piece? What’s your bug fixation?